Theatre credits include comic turns as a tea swilling killer in THE ART OF TEA at the Workshop Theater, directed by Paula D'Alessandris.  Kate was also part of the highly acclaimed Off-Broadway productions CHARLES & DIANA THE MUSICAL, and Moonwork's ROMEO & JULIET.  As a voice talent she has sold everything from cell phones to pie. Past and current voiceover clients include: PFIZER CONSUMER HEALTH, GRAND THEFT AUTO SERIES--CONFIDENTIAL AND GRAND THEFT AUTO-VICE CITY STORIES, A & E BIOGRAPHY, MACYS, KAISER PERMANENTE, HONEY BAKED HAM, and many more. www.kategreer.com

Film Credits include:  M. Night Shyamalan’s THE AIRBENDER, F. Gary Gray’s LAW ABIDING CITIZEN, and Dreamwork’s TRANSFORMERS 2, REAL MEN WEAR PINK, THE RITUAL, and BALLISTIC.  TV credits include: LIFE ON MARS, THE WIRE, & ITS ALWAYS SUNNY IN PHILADELPHIA. Anthony’s many talents include martial arts, stunts, and handling of fire-arms. He is also a skilled carpenter and wood-worker.  Proud member of the Screen Actor’s Guild. www.anthonymecca.com

James A. Lee - The Ghost of Johnny Cash

James just completed Begonya Plaza’s politically charged short film AMERICAN HERO... about an Iraqi War Soldier home dealing with his psychological & physical wounds before being deployed back to the frontlines... He would like to thank all of the Men and Women who sacrifice themselves and lay down their lives for our Freedom... James studied for years with famed Acting Teacher Robert Lewis cofounder of The Actors Studio... He now works very closely with his Mentor Susan Batson... TV Credits include: LAW & ORDER and SEX & THE CITY. Currently, he is getting ready for the Broadway Stage, and is set for two upcoming “secret” projects... He lives by his Motto "If you don't know where you’re going... Turn around and look how far you've come.” 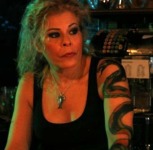 Roberta Wallach made her screen debut in THE EFFECT OF GAMMA-RAYS ON
MAN-IN-THE-MOON MARIGOLDS, directed by Paul Newman. She has appeared in several films including, FM,  HOLLYWOOD KNIGHTS (with Robert Wohl, Tony Danza, & Michelle Pfeiffer), MISTRESS (with Robert DeNiro), MEN WITHOUT JOBS, REAL WITH ME, THE BEST THIEF IN THE WORLD (with Mary Louise Parker & Audra McDonald) and LUCKY DAYS (with Angelica Torn).  Roberta has also been seen on television in several episodes of LAW AND ORDER and on THE SOPRANOS.

Theatre Credits include: THE DIARY OF ANNE FRANK, HATFUL OF RAIN directed by Frank Corsaro at the Actor's Studio, NY), DOWN THE GARDEN PATH  by Anne Meara, with John Shea, THE MODEL APARTMENT directed by Doug Hughes, and THE IDENTICAL SAME TEMPTATION, directed by Robert Glaudini.  She has worked with many great actors including Joanne Woodward, Eileen Heckhart, Kate Reed, Bette Davis, Ruth Gordon, Stephen Lang, Bud Cort, and Josh Peck, among others.

Film and TV Credits include:  GUILTY, starring Cuba Gooding, Jr; and as Tim Blake Nelson's wife in DETACHMENT, starring Adrien Brody, directed by Tony Kaye; multiple episodes of THE ONION on IFC, and two award winning short films: DAUGHTER OF LILITH by Manja Lyssy and HAVADALAH by Alison Silverman-official selections of both the Sante Fe and Delray Film Festivals.

Theatre credits include the following: Off-Broadway: Ros Openwork in THE ROARING GIRLE by Alice Tuan, directed by Melanie Joseph at the Foundry Theater; Ida in THE IDENTICAL SAME TEMPTATION written and directed by Bob Glaudini at the Theater for the New City; EATING SKELETONS by Jen Rudin at the Variations Theatre Festival, directed by Tracy Francis Cameron; Stephanie in ERIC LARUE by Brett Nevue, directed by Ian Morgan at HERE.  Regional: Rachel in MODERN ORTHODOX by Daniel Goldfarb, directed by John Pasquin at the Long Wharf.  Rebecka can also be seen in various commercials including Pillsbury, Microsoft and many more!.  AEA SAG AFTRA